Australians Storm Sanders and John Peers have completed a dream fortnight in their first tournament as a team, winning the mixed doubles title at the US Open. 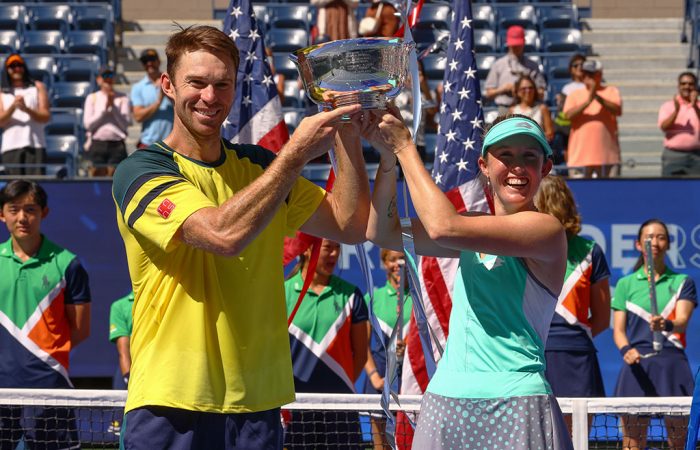 With an ace down the T, John Peers and Storm Sanders captured their first Grand Slam mixed doubles title at the US Open.

This was Sanders’ and Peers’ first tournament together, and after a slow start they grew in confidence before ending the final with a flourish in the match tiebreak.

Sanders brought up championship point with a lunging volley winner, before Peers cemented victory with the aforementioned ace.

It is Peers’ first Grand Slam mixed doubles title and second overall, after his men’s doubles triumph at Australian Open 2017.

And it was Sanders’ first Grand Slam final of any kind, adding significance to this breakthrough triumph at Flushing Meadows.

“I can’t believe we’re Grand Slam champions, that’s crazy!” Sanders said to Peers during the trophy presentation, as the pair were watched on by another Australian in US Open singles and doubles champion Sam Stosur.

Sanders elaborated in the post-match press conference: “To be honest, I still don’t think it’s really sunk in.

“Even before the match, I was just thinking it’s another match, doesn’t matter. Amazing opportunity and a great challenge to be playing on the biggest court in the world in a Grand Slam final.

“Obviously I lost my doubles semifinal yesterday in a close one. I had to kind of let that go and just really focus on today.

“Having Sam there as well watching on, it was just super amazing. Kind of gave me a little bit of calmness knowing that she was there. I think she yelled out ‘Believe in yourself’ to me once, and that definitely helped.

“It still doesn’t really feel real to be honest. This is the first time Johnny and I have played together. We played really well all week. We had some really tough opponents. Our game styles match up really well. We also have a lot of fun out there, too.” 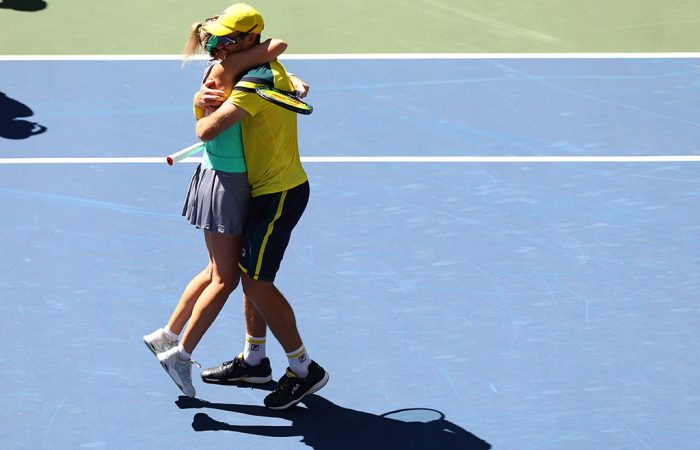 Flipkens and Roger-Vasselin started the stronger of the two teams before a notable crowd at Arthur Ashe Stadium, who filled most of the lower bowl, and some sections of the higher bowls, to add extra atmosphere to this Grand Slam decider.

Dominant on serve and more cohesive at net, they took a one-set lead after 36 minutes, committing just two unforced errors as a pair to the Aussies’ seven.

But Sanders and Peers worked their way into the final, and were giving the Belgian-French duo a tougher time on serve.

In the seventh game, they recovered from 40-15 down to force deuce, which in major mixed doubles matches means a sudden-death point.

And while they could not convert that break-point chance, they did two games later; Peers split his opponents down the middle with a winning volley for 15-30, and then Roger-Vasselin double-faulted.

It meant two more break points, and this time, two set points; on the second, Peers fired a return winner to send the final to a match tiebreak.

Here, the Aussies leapt ahead 4-1 before the tiebreak tightened.

And as the tension mounted, the quality rose.

After a double fault, Peers rebounded with a winning overhead to put the Aussies ahead 5-4, and later played another return winner for an 8-6 lead.

Roger-Vasselin then played a drop volley to keep himself and Flipkens in contention at 7-8.

But it was at this juncture Sanders responded with her lunging volley winner to bring up the first, and only, championship point.

Peers’ ace meant he and Sanders finished with 45 winners, to Flipkens’ and Roger-Vasselin’s 23.

“Storm and I have been set with other partners when either one of us have tried to play with the other one,” Peers explained about the reason his partnership with Sanders took time to finally materialise.

“We sort of said a few months back, Look, if we don’t do really well with a different partner, let’s try to do the US.

“We were able to string it together here, which is great. Just timing worked out nicely. It was a lot of fun.”

Sanders and Peers confirmed they will also pair up to play mixed doubles at Australian Open 2023.

“We haven’t chatted past Aussie (Open) to be fair,” Peers said.

“I think we’ll have a chat about something like that soon.”