Storm Sanders, competing in the women’s doubles semifinals alongside American Caroline Dolehide, is one of three Australians in action on day 12 at Flushing Meadows. 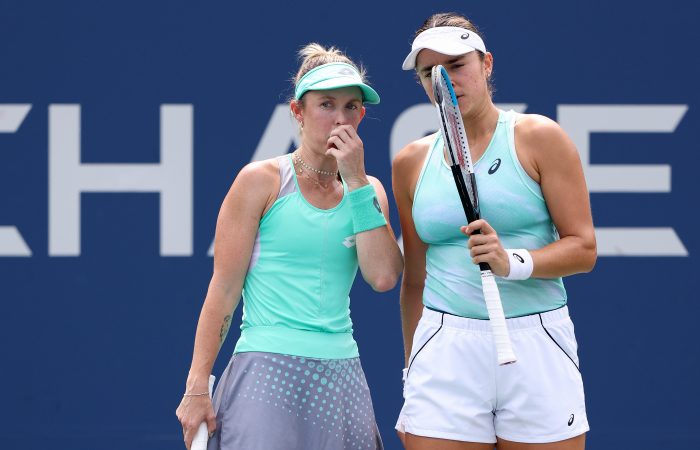 Storm Sanders is hoping to become the first Australian woman in 21 years to advance to both the US Open women’s doubles and mixed doubles finals in the same year.

The 28-year-old is already through to the championship match in the mixed doubles competition, winning her semifinal alongside fellow Australian John Peers yesterday.

The world No.21’s focus now turns to the women’s doubles semifinals, where she’ll team with American Caroline Dolehide on day 12 at Flushing Meadows.

This is Sanders’ second major semifinal alongside Dolehide. The No.12-seeded pair also made the final four at Wimbledon 2021, where they had three match points in a “heartbreaker” semifinal loss.

“The pressure of the moment got to us and we were overthinking,” Sanders admitted.

“(This time) I hope we can go out there and not think about that extra pressure.”

Sanders is one of three Australians scheduled to compete on day 12 at Flushing Meadows, with Taylah Preston and Saalim Naser also in action in junior competitions.

The US Open is broadcast on the Nine Network and Stan Sport in Australia, with coverage beginning from 2am AEST.

[12] Storm Sanders (AUS)/Caroline Dolehide (USA) v Caty McNally (USA)/Taylor Townsend (USA)
Women’s doubles, semifinals, Louis Armstrong Stadium, second match (not before 4am AEST)
After facing off in the mixed doubles semifinals yesterday, world No.21 Sanders and world No.22 McNally are on opposing sides of the court once again. The 28-year-old Sanders is the only player on court competing in her first US Open women’s doubles semifinal. The other three have all reached this stage once before. The 20-year-old McNally is the only previous finalist, finishing runner-up alongside Coco Gauff last year. Her new partner, world No.103 Townsend, returned to the tour this year after having her first child.

Saalim Naser (AUS) v [1] Ben Bartram (GBR)
Boys’ wheelchair singles, semifinals, Court 10, second match
Naser, an 18-year-old from Melbourne, has advanced to the semifinals in the inaugural US Open boys’ wheelchair singles event. The world No.6-ranked junior now faces top seed Bartram, a 17-year-old Brit ranked No.2. They have played twice before, splitting results. However, this is their first meeting since August 2019.