Nick Kyrgios, competing alongside Thanasi Kokkinakis in men’s doubles, is among 10 Australians in action on day eight at US Open 2022. 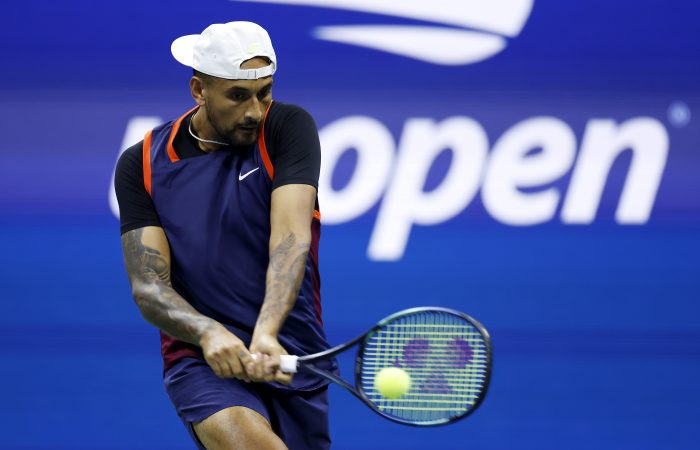 Nick Kyrgios is enjoying a career-best run – in both singles and doubles – at this year’s US Open.

“I feel like I’ve been working really hard,” Kyrgios said. “I’ve just got a lot of motivation at the moment.”

The 27-year-old Australian has progressed to the third round in the men’s doubles competition alongside Thanasi Kokkinakis. Unbeaten in Grand Slam doubles matches as a team this season, the Australian Open 2022 champions will look to continue their winning run when they face in-form No.11 seeds, Brit Lloyd Glasspool and Finland’s Harri Heliovaara.

Wimbledon 2022 champions Matt Ebden and Max Purcell are also in action on day eight at Flushing Meadows, facing Wesley Koolhof of the Netherlands and Brit Neal Skupski. This is their third Grand Slam meeting this season, with the Aussies having beaten the second seeds during their finals runs at both the Australian Open and Wimbledon.

In total, 10 Australian players are scheduled to compete across doubles and junior competitions on day eight in New York.

[12] Storm Sanders (AUS)/Caroline Dolehide (USA) v [7] Xu Yifan (CHN)/Yang Zhaoxuan (CHN)
Women’s doubles, third round, Court 17, first match (from 1am AEST)
World No.21 Sanders is looking to match her career-best result at the US Open and advance to the quarterfinals for a second consecutive year. The 28-year-old Australian and American partner Dolehide face a big test against seventh-seeded Chinese duo Xu and Yang. They have played once before, in the Miami quarterfinals earlier this season where world No.18 Xu and world No.14 Yang recorded a three-set victory.

Matt Ebden (AUS)/Max Purcell (AUS) v [2] Wesley Koolhof (NED)/Neal Skupski (GBR)
Men’s doubles, third round, Court 5, second match
Ebden and Purcell are on a nine-match winning streak in Grand Slam doubles matches. The Wimbledon champions are looking to advance to the US Open quarterfinals for a second consecutive year, but face a tough challenge against the second seeds. World No.3 Skupski and world No.4 Koolhof have been the world’s top-performing team this season, winning six titles from eight finals appearances.

[8] Thanasi Kokkinakis (AUS)/Nick Kyrgios (AUS) v [11] Lloyd Glasspool (GBR)/Harri Heliovaara (FIN)
Men’s doubles, third round, Grandstand, third match
World No.18 Kyrgios has matched his career-best US Open doubles result, progressing to the third round for the first time since 2016. He and world No.22 Kokkinakis, who is making his US Open doubles debut, are having a lot of fun on court and now eyeing a quarterfinal spot. The eighth seeds face world No.26 Glasspool and world No.21 Heliovaara, the No.11 seeds who have advanced to five tour-level finals together this season.

Sam Stosur (AUS)/Matt Ebden (AUS) v Kirsten Flipkens (BEL)/Eduoard Roger-Vasselin (FRA)
Mixed doubles, quarterfinals, Court 17, fourth match
Stosur and Ebden have progressed to their fourth Grand Slam mixed doubles quarterfinal as a team. The Wimbledon 2022 finalists now face world No.62 Flipkens and world No.48 Roger-Vasselin for a place in the semifinals. World No.20 Stosur is hoping to advance to her second career mixed doubles semifinal in New York, while world No.34 Ebden is targeting a first.

[Q] Edward Winter (AUS) v Alexander Blockx (BEL)
Boys’ singles, first round, Court 9, first match
Winter, a 17-year-old from South Australia ranked No.94, earned his place in the US Open boys’ singles draw as a qualifier. After winning two qualifying matches, Winter carries momentum into this first-round clash with Blockx, a 17-year-old from Belgium who is ranked No.43 and claimed an ITF junior title in Canada last week.

Charlotte Kempenaers-Pocz (AUS) v Kayla Cross (CAN)
Girls’ singles, first round, Court 6, second match
The big-hitting Kempenaers-Pocz, who was an Australian Open girls’ singles semifinalist earlier this season, is making her US Open debut. The 17-year-old South Australian, who is ranked No.41, faces 17-year-old Cross, a Canadian ranked No.26 who has advanced to two Grand Slam girls’ doubles finals this season.

[8] Taylah Preston (AUS) v Angella Okutoyi (KEN)
Girls’ singles, second round, Court 8, third match
Preston has progressed to the second round at all four junior Grand Slams this season. The 16-year-old from Perth, who is ranked No.13, faces 18-year-old Okutoyi, who made history at Wimbledon this year by winning the girls’ doubles title to become the first-ever Kenyan Grand Slam champion.