Thanasi Kokkinakis’ struggles with injury and illness have been well-covered. The Australian has admitted there have been plenty of doubts about whether he would ever reach his potential.

But with the biggest breakthrough of his career in January — winning his first ATP Tour singles title in Adelaide and triumphing in the Australian Open doubles with Nick Kyrgios — Kokkinakis has changed the narrative.

“I proved that the mind is probably the most important thing. Obviously you’ve got to have some skill and a work ethic to balance it out, but if you’re strong with your mind and you keep pushing, you never know,” Kokkinakis told ATPTour.com. “The fortunate thing with tennis is you’re only a week away from turning your career around, so that’s the biggest thing.” 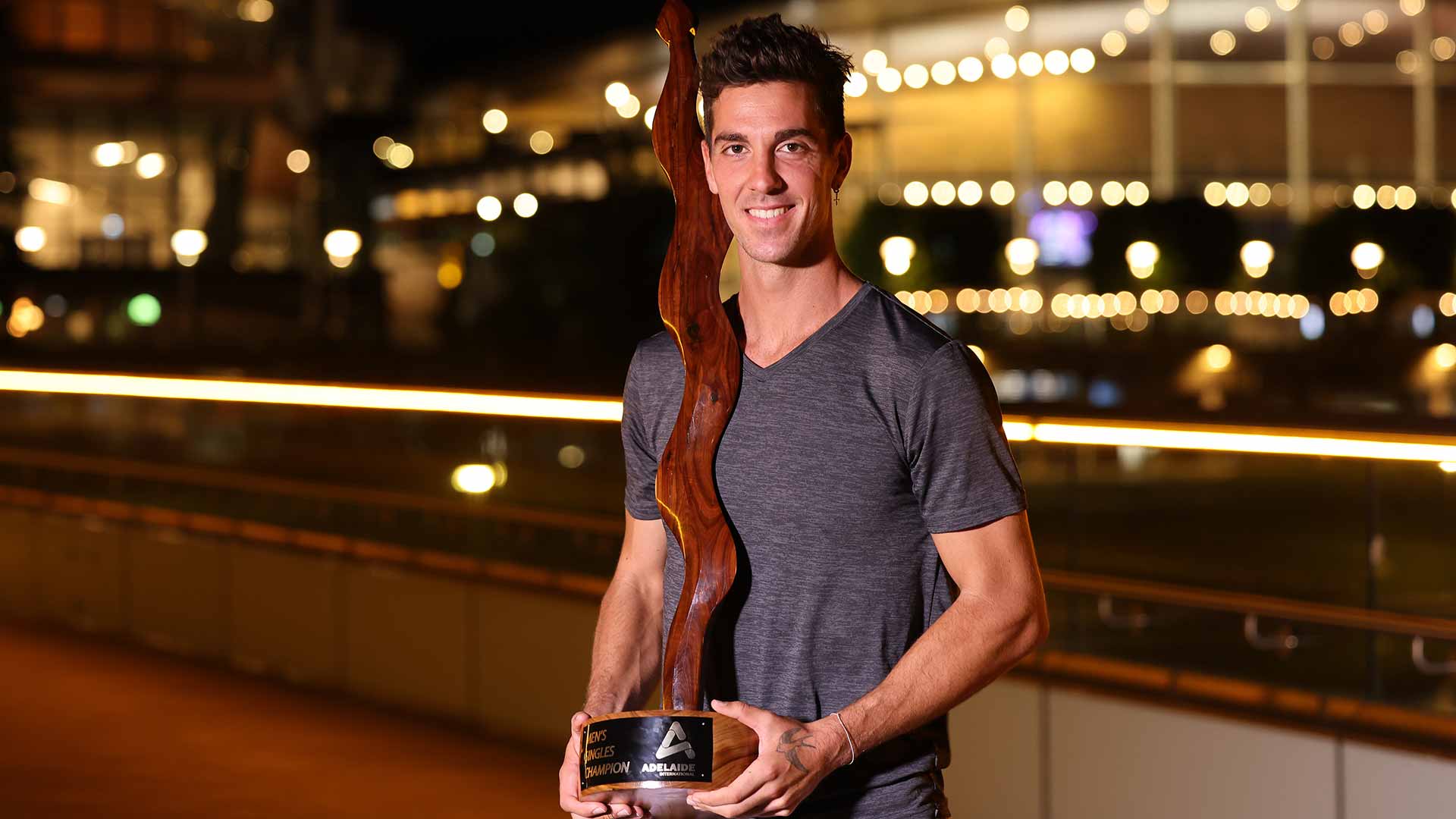 Thanasi Kokkinakis” />
Thanasi Kokkinakis celebrates his first ATP Tour singles title in Adelaide. Photo Credit: Tennis Australia.
Kokkinakis first cracked the Top 100 in the ATP Rankings in May of 2015, just after his 19th birthday. But since then, the Australian has had his fair share of ups and downs, suffering injuries to his shoulder, abdominal and pectoral just to name a few. He also missed all of 2020 due to mono.

Last year, Kokkinakis mostly spent his days on the ATP Challenger Tour. He began this season at World No. 171.

“It seemed far even in December,” Kokkinakis said of a big breakthrough. “I knew I was capable of winning a couple of matches. I knew what I could play like [at my] top level, but to back it up and have that consistency, that’s been the most impressive part.”

Now Kokkinakis is back in the Top 100 for the first time in six years and he will look to continue his surge at the BNP Paribas Open at Indian Wells. The fan favourite believes there is a lesson others can take from his journey.

“I think it’s just not going to happen overnight. There are a lot of steps that need to be done and keeping the faith, keeping the hope a little bit [is important],” Kokkinakis said. “It can seem very, very far away, but a lot of the time if you put some good days together, some good weeks and some good months together and keep going slowly, that’s the way forward.

“Hopefully they saw the story of what the past few years have been like for me and if that gives them some positivity, that’s perfect for me.” 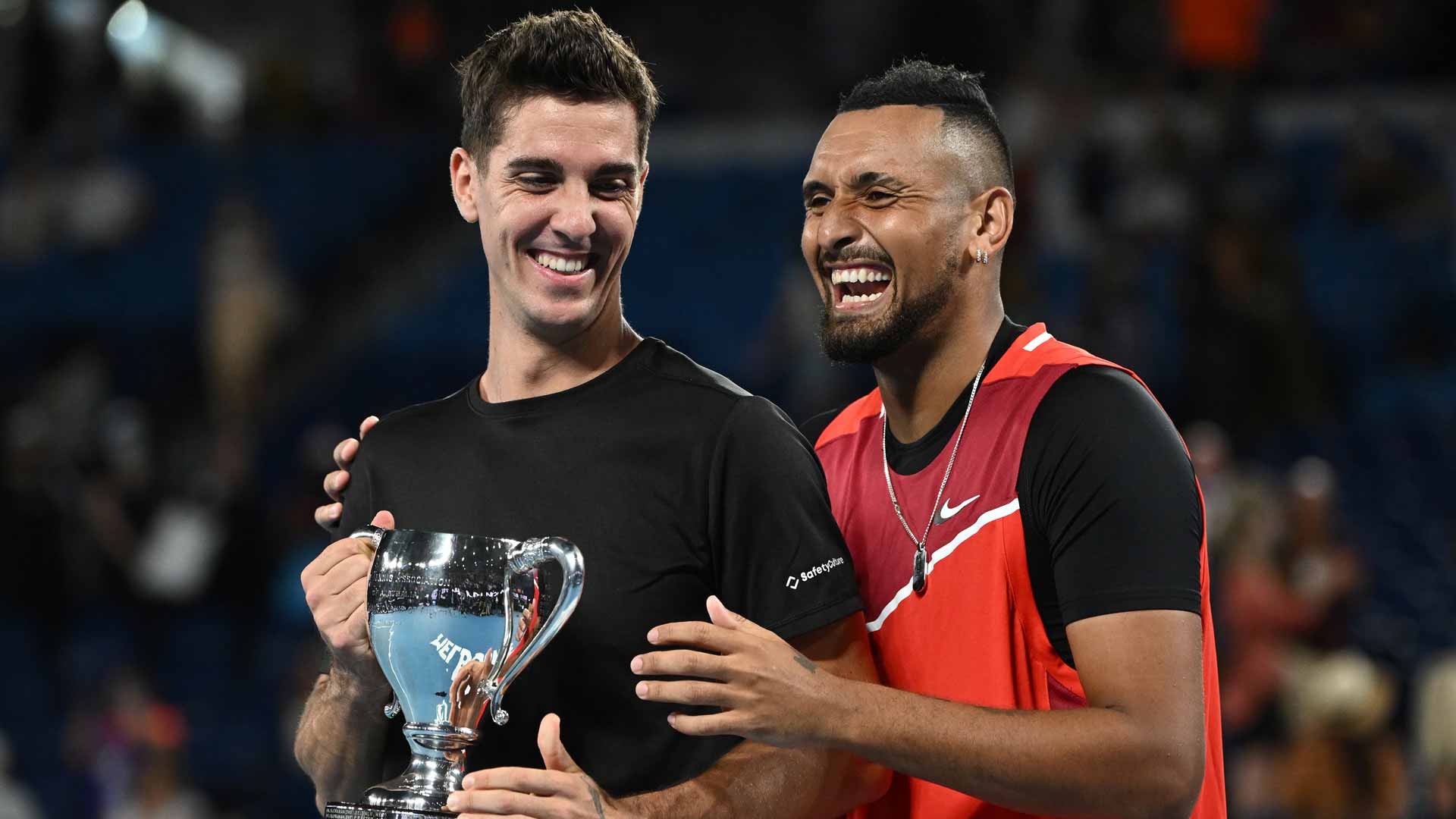 Thanasi Kokkinakis and Nick Kyrgios” />
Thanasi Kokkinakis and Nick Kyrgios lift the Australian Open doubles trophy. Photo Credit: Quinn Rooney/Getty Images.
The 25-year-old has had little time to celebrate. Kokkinakis departed Australia on 1 March. He was able to enjoy himself by taking in a basketball game between the Miami Heat and Brooklyn Nets, later catching up with Nets player Patty Mills, who is also Australian. But after tournaments in Delray Beach and Acapulco, he is back to business.

“There’s not really much time to reset as a tennis player. For something that big to happen to me in January, a lot of other sports that’s like winning the championship, you have a lot of time off and celebrate for a while, refresh and go again,” Kokkinakis said. “In tennis you don’t really have much time for that and if you do, you risk getting left behind. That’s the tricky thing. I’ve just got to find a way and get myself going again.”

Kokkinakis admitted that there “definitely feels like a weight off my shoulders” following his big effort Down Under. But with that, there is extra pressure, which is something he eventually wanted. The World No. 94 understands every week will likely not be as successful as his runs in Adelaide and Melbourne, but that will not stop him from trying.

“I think you want to make the most of the opportunity I’ve given myself. You want to see how far you can push it,” Kokkinakis said. “It was a little tough trying to get myself going again after the January I had. I felt like I was playing for a whole month every day, every other day. [It is about] trying to get myself mentally into a spot where i’m like, ‘Hang on, there’s a lot more work to do’ and try to get the most out of myself.”

One of the most difficult things for Kokkinakis was actually leaving Australia. He returned home last November, but said during the preseason it is tough to spend quality time with friends and family because of training. Although it was tough for him to head back on the road, he hopes to make the most of his momentum.

“It’s been a pretty crazy start to the year,” Kokkinakis said. “It’s not something I expected, but it’s definitely something I worked really hard for.”