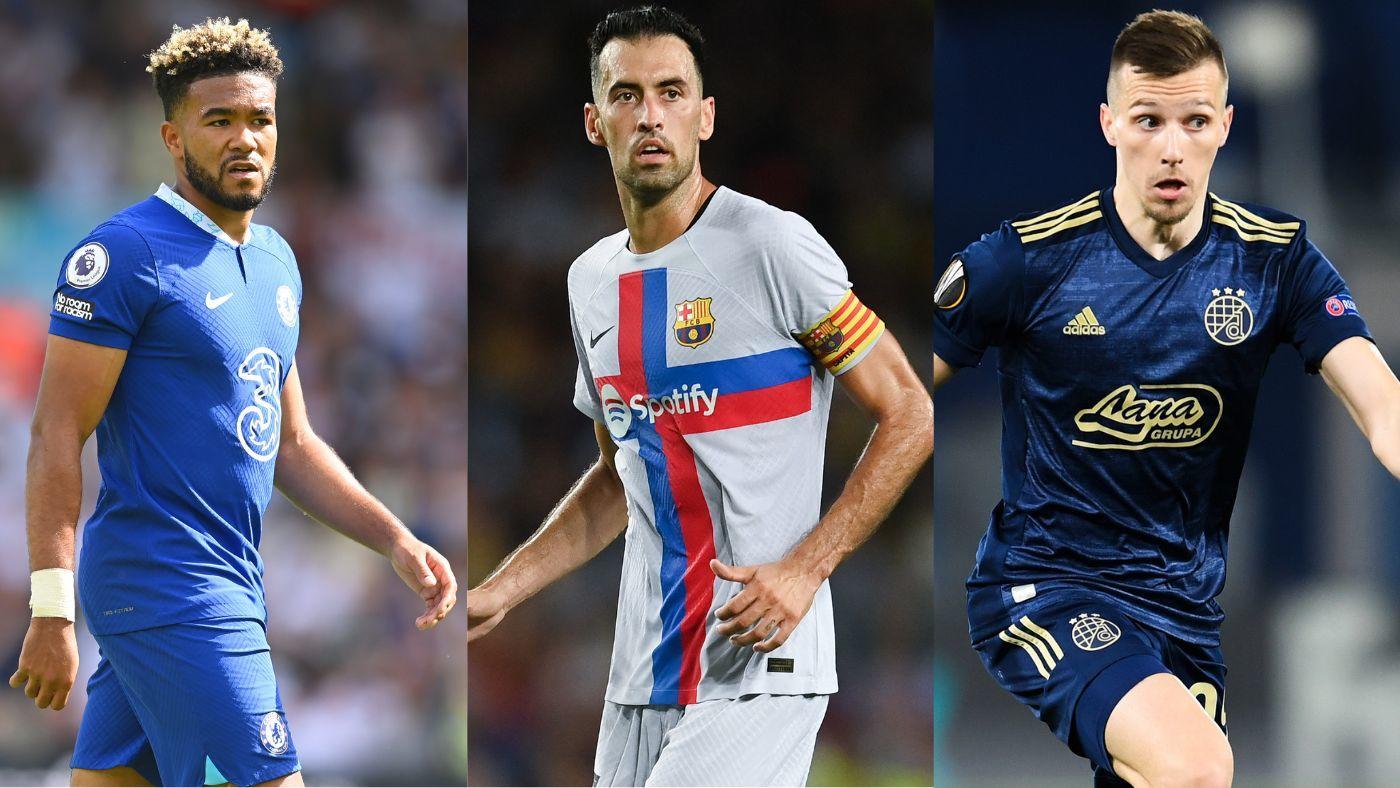 With the Champions League group stage kicking off on Tuesday on Paramount+, it’s a good time to take a look at who the most irreplaceable players in the field of 32 teams taking part are. From defenders and goalkeepers who protect the net, to forwards tasked with bringing the goals and everything in between, we’re taking a look at the ten most important players during the group stage.

That doesn’t mean we’re talking about the best players though. Since some of the larger teams like Real Madrid can make it out of their group without a star like Karim Benzema, he won’t be included in this as we’re aiming to find the players who a team couldn’t advance from their groups without.

Let’s look at the list, presented in no particular order.

Possibly the most important attacker and defender for the Blues this season, James has collected a goal and an assist in Premier League play while splitting time between right wing-back and right center back. He’s Chelsea’s best wing-back while also being one of the better center backs on the roster, and now Wesley Fofana’s arrival from Leicester City will allow him to spend more time out wide, driving the ball into the final third. James can lock up a team’s best winger — which will be important facing players like AC Milan’s Rafael Leao — while also linking up with Raheem Sterling to pace the attack. Out of everyone on Chelsea’s roster, James is the one player whose absence for any reason could see them crash out of the group stage.

Robert Lewandowski may raise Barcelona’s ceiling but Busquets raises their floor. As Group C shapes up as a group of death featuring Bayern Munich, Inter Milan, and Viktoria Plzen, there will be fine margins between a team making it to the knockout stages or heading to Europa League. With a game that ages like a fine wine, Busquets hasn’t been slowed down by losing a step and at 34 his style has evolved with age. Making defender’s jobs easier by funneling attacks into easier places to deal with while also ticking play over for the attack, Busquets is someone on the roster who can’t be replaced. Frenkie de Jong can help with moving the ball but he’s a different type of defensive midfielder which would cause the high-powered attacks that Barcelona will see to cut them apart.

According to post-shot expected goals metrics no keeper prevented more goals than Vlachodimos’ 6.42 in Champions League last season. With 57 saves of 76 shots on goal last season, he and Thibaut Courtois stood head and shoulders above the other keepers in the competition. While Ajax were chasing him on deadline day, Vlachodimos is still with Benfica and will need to put in a similar performance if they’re going to make it to the knockout stages again. Without Darwin Nunez, teams will have a little less to worry about on the attacking end from Benfica which will likely see Vlachodimos face even more shots than he did last season.

After winning Europa League last season, Kamada and Frankfurt will have a tall task in Champions League but if Kamada can bring his European form from last season that saw him score five goals and assist one more, Frankfurt’s chances of making it through the group stage would rise significantly. With three goals and one assist in Bundesliga play this season, Kamada could be in the middle of a breakout season at an important time after the club lost significant depth this summer. Filip Kostic’s move to Juventus has seen Frankfurt lose one of their better chance creators, but with Kamada becoming more clinical on the attacking end, those losses my not hurt Frankfurt too much.

Back from an injury shortened 2021-22 season, Osimhen is getting better by the day leading the line for Napoli. Osimhen had 18 goals in all competitions last season but could easily outdo that this around. The departures of club legends Dries Mertens and Lorenzo Insigne mean the team is now built around him. The midfield and supporting cast around Osimhen have also improved but facing Liverpool, Rangers, and Ajax Napoli will need the ball to hit the back of the net to advance to the knockout stages of the tournament. Dangerous on the dribble, he’ll create his own chances if given space which is why Osimhen can be a one man wrecking crew during the group stage.

Salah hasn’t hit his lofty expectations while Liverpool have struggled to open the Premier League season. Touching the ball less as the team looks to integrate Darwin Nunez, Salah “only” has two goals and two assists so far this season. I say only as that return for would be great for most players, but when Salah scored 23 and assisted 13 more goals last season, he’s in a different stratosphere. Liverpool as a whole haven’t had the start to the season that they’d like with nine points in six matches, but if Salah can revert to being the team’s talisman, things will get back to normal quickly as Champions League play takes center stage.

Mane has quickly made himself indispensable to Bayern Munich since arriving from Liverpool with three goals in five matches. Bayern are in a tough group so manager Julian Nagelsmann will need Mane the winger and Mane the number nine depending on what the circumstances call for. Flexibility is why Bayern Munich hasn’t missed Robert Lewandowski so far this season and he’ll even have the added bonus of getting to face off against the player that he replaced when Bayern meets Barcelona during the group stage.

An important player for club and country, Orsic will cause the Chelsea defense issues as he’s dangerous anytime that he touches the ball. Involved in nine goals domestically this season, Orsic was critical for Dinamo Zagreb making it through the playoff stages of Champions League, already collecting three goals this year. If he’s able to keep things going Dinamo could have a good chance of ending up in the Europa League while troubling Chelsea and AC Milan in their matches. If things get wild enough during the group stage, don’t count Dinamo out as a dark horse side to make the knockouts.

One of the most electric forwards in the world, Nkunku was almost involved in a goal per game in Bundesliga play last season. While Timo Werner’s return to Leipzig provides more attacking power this season, Nkunku is among the best at what he does in the world. With five goals under his belt in all competitions, Nkunku will look to prey on Celtic and Shakhtar Donetsk’s defenses to  make it to the knockout stages.

Pepe and Porto are synonymous as the 39 year old is still going strong and pacing the defense. The heart and soul of the squad, Pepe’s combativeness may go over the top at times, but it will also push Porto to punch above their weight in Champions League. Without a proper replacement on the roster, Porto will eventually need to look to life after Pepe but that won’t be a need this season.