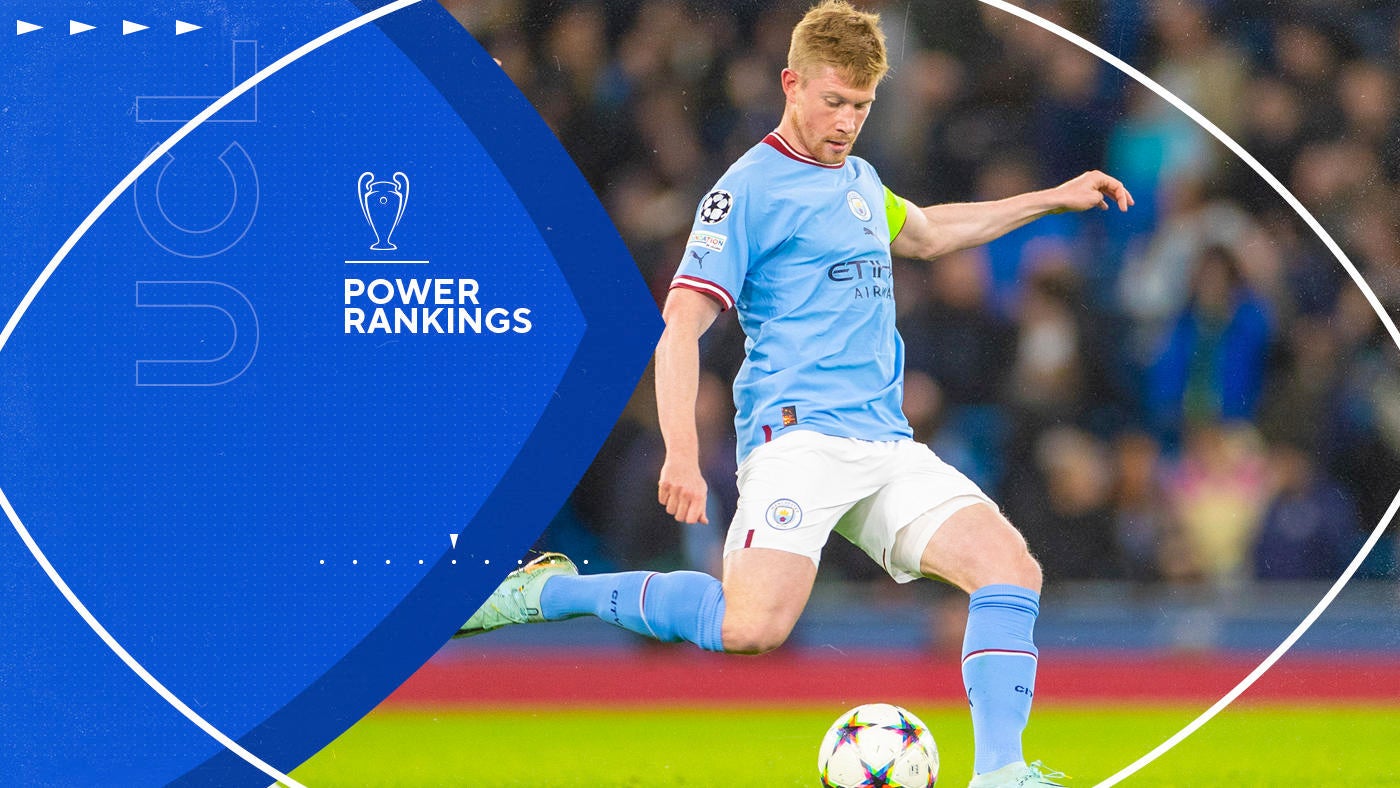 The draw for the round of 16 has been made. Suddenly Europe’s top sides are just seven games away from glory in Istanbul but there is still a lot of work to be done in separating the wheat from the chaff, and you catch all the action on Paramount+. Use offer code ALLYEAR now to get 50% off the annual plan. A reminder at this stage that our rankings are based around the tournament’s most likely winners, as such those teams that have been handed a particularly tricky round of 16 tie might be lower on these particular power rankings than they would be if we simply ranked Europe’s best teams in order.

The top tier: Title or bust

These teams should be disappointed with anything less than a semi final berth and frankly even that might not be enough, such is their talent profile.

All the focus has been on Erling Haaland, and rightly so, but City are quietly building a defense on a par with the one that took them to the final in 2021. No side has given up fewer expected goals (xG) in both the Premier League and Champions League than Pep Guardiola’s, something that is enough to convince you that they will be immune to the sort of kamikaze showings at the back that have cost them in years gone by.

Their draw may be among the most challenging — and it is worth remembering that only a miraculous goalkeeping performance from Thibaut Courtois allowed them  to beat Liverpool in last season’s final — but this Madrid team inspire faith, perhaps even more so than they did on their way to victory in Paris. Federico Valverde has emerged not just as an heir to the legendary midfielders that still stalk the Santiago Bernabeu but as one of the best young players in the world. Vinicius Junior, Rodrygo and Aurelien Tchouameni are not far behind in that category. Ally that to the experience riven across the squad and you have serious contender status.

Serious contenders: If things go right, why not us?

It certainly is not beyond the realm of imagination that any of these teams could be lifting the European Cup in Istanbul come May, though it may require a few fortunate breaks for the tournament to go their way.

Luciano Spalletti has every reason to feel confident in his side’s ability to make a deep run after being drawn against Eintracht Frankfurt. After all, in comparison with other heavyweights in this competition they will not see many key players jet off to Qatar with Victor Osimhen, Kvicha Kvarastkelia and the Italian contingent having missed out on qualification for the tournament.

Another contender who will be cursing the luck of the draw, Bayern Munich will surely need to up the defensive work that has allowed the likes of Viktoria Plzen, Augsburg and Hertha Berlin to score multiple goals on them in recent games. Equally Julian Nagelsmann seems to have deliberately loosened things up at the back to unleash a frontline that ripped through quality opposition in the group stages, where a batch of goals were shared out encouragingly across the frontline.

Dark horses: Unlikely contenders, but contenders all the same

These teams are unlikely champions, but then so were Real Madrid at this time in 2021. It may take a change of circumstances, or a new tactical plan, or simply Karim Benzema having the season of his life, but it’s possible. It’s certainly not probable, but stranger things have happened.

Memories of this column’s rush to crown Ajax serious contenders last season have not faded and hang over Benfica. I don’t want to get carried away but how can you help yourself against a team who have already proven themselves to be a match for one possible contender in PSG? Their attack by committee has brought sparkling displays out of Rafa, Joao Mario and Goncalo Ramos whilst a midfield anchored by Enzo Fernandez controls games against more starry opposition.

Lionel Messi is the best he has looked for some time. Similar assessments could be made about Neymar. Kylian Mbappe leads the Champions League scoring charts and is the only player into double digits for goals and assists combined. And yet still this team underwhelms, finishing second behind an excellent Benfica but one they would have expected to hold at arms’ length. Anyway, for all the attacking excellence the front three have shown the decisive factor against Bayern may well be what that trio do when the Bavarians have the ball. All too often the answer is nowhere near enough.

If they get past Real Madrid then you have to make Jurgen Klopp’s side serious contenders to win it all, not least because presumably to have done so they might have found a modicum of the consistency that has eluded them in 2022-23. The first half of their win over Tottenham pointed to how effective a force they can be and their attack will surely take a step forward when Diogo Jota and Luis Diaz return. But the experience of the team below them points to how damaging boardroom instability can be. For obvious reasons it won’t be as profound for Liverpool but now is not a great time for the instability that could come with a change of ownership.

The Blues have slumped somewhat of late but their defense should be greatly improved by the time that they face Borussia Dortmund while Reece James will add plenty to a stuttering attack too. The questions further up the pitch are, however, more profound. Without N’Golo Kante, who if he is back in February will presumably be as a shadow of his former excellence, there is a lack of dynamism in midfield whilst Graham Potter is struggling to forge a cohesive front three from Raheem Sterling, Kai Havertz and Pierre-Emerick Aubameyang.

In the quarterfinal mix

Only in the most unlikely of circumstances could these teams make seriously deep runs in the competition but don’t rule them out of winning a round, perhaps even two, before they bid farewell.

Though losing the Derby d’Italia was a frustrating thud with which to end a good run of results in Serie A, it would appear that Simone Inzaghi is finding a formula that suits his players long before their tie against Porto. His midfield is looking increasingly front-footed with room found for Henrikh Mkhitaryan and Hakan Calhanoglu even filling in as a regista. That looks like the ideal blend to break down a Porto side that tend to unlock defensive superpowers in the knockout stages.

More than perhaps any of the other 15 sides, Spurs promise to be a different proposition by the time February arrives. That is assuming that all three of Richarlison, Dejan Kulusevski and Heung-min Son are back to fitness; without them Antonio Conte’s side seem intent on showing no real attacking thrust until they go at least one goal down. Might Tottenham also pick up a bit of midfield guile in the January transfer window? It was the missing piece their manager wanted. Add it for him and this side could improve significantly.

Their tie with Spurs might be the most finely balanced of all those in the last 16. For Stefano Pioli the winning route probably goes through midfield. Can Sandro Tonali and Ismael Bennacer impose their possession game in a way they did not against Chelsea? Then there is the potential x-factor that is Rafael Leao, who could do all sorts of damage to Emerson Royal or Matt Doherty down the Milan left, dragging Cristian Romero out of position and making chances for Olivier Giroud.

The defensive strides that this team have taken this year make them an intriguing test for Chelsea whilst Youssoufa Moukoko might have taken further leaps and bounds come February. Then there is the breathtaking form of Jude Bellingham, a star on the rapid ascendance. The more I write about this team the more convincing their candidacy becomes. Best to stop before I go wild.

Of all the teams in the last 16, Porto might be the hardest to get a true measure on right now. In their domestic league they are doing ok and it is hard to know how disappointed a team should really be if they cannot keep pace with this outstanding Benfica outfit. They topped their Champions League group but benefited from the collapse of Bayer Leverkusen and Atletico Madrid. The months ahead may tell us more but for now the Dragons are an intriguing mystery.

Bound for the exit

In reality the greatest achievement of this team might simply have been getting this far in the first place.

The two sweetest words in the English language carried them into the knockout stages: default. Marseille and Sporting were simply too chaotic to be allowed into this elite club, Daichi Kamada and company were happy to oblige. Oliver Glasner’s side are a solid Bundesliga outfit but it is hard to see them having enough to truly test Napoli.

Their fairytale might really have been those early group stage games and a convincing defeat to Porto on matchday five offered a more worrying assessment of what Club Brugge can achieve against the best sides in this competition. They also figure to be a club who will attract many suitors in January, certainly wise clubs would be testing the price tags for Ferran Jutgla, Andreas Skov Olsen and Hans Vanaken.

Every year there is a team that draws Manchester City in the round of 16. The objective of the game is for that to not be you. Marco Rose’s side have hit a rich vein of form in recent weeks and have an awful lot of very good players but it is hard to shake the sense that they are mere gristle for Europe’s finest mill.