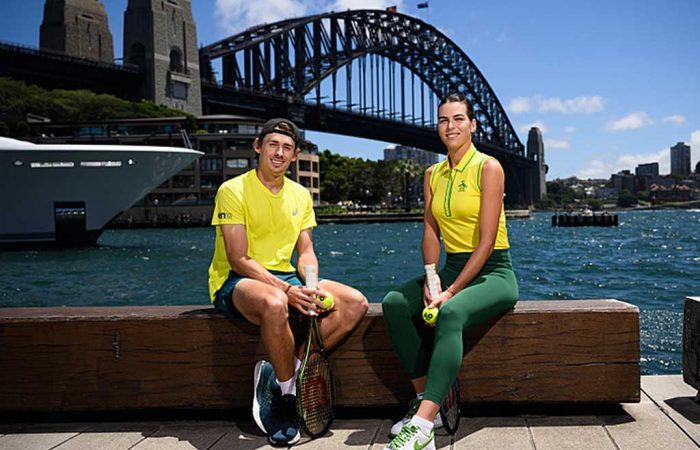 Ajla Tomljanovic didn’t need to think twice when presented with the opportunity to represent Australia alongside Alex de Minaur at the inaugural United Cup.

She had watched her fellow Australia shine at both Laver Cup and Davis Cup in his career-best 2022 season – and was excited to enjoy him in the innovative mixed teams tournament.

“(He) just thrives in team events,” said Tomljanovic as the pair were joined by team-mates Jason Kubler and Zoe Hives at Campbells Cove, on Sydney Harbour, ahead of Australia’s first scheduled matches at Ken Rosewall Arena on Thursday. “If there’s a team event, you know Demon’s going to sign up for it.”

De Minaur was similarly inspired to take to the court with Tomljanovic and other team-mates, continuing the momentum of Australia’s runner-up finishes in both the Billie Jean King and Davis Cup competitions in 2022.

“It’s pretty amazing what we were able to accomplish in team events this year,” said De Minaur. “And Team Australia, we’ve got a lot of pride, a lot of passion. I can’t wait to share this court with (Ajla).

Prioritising professional commitments over Christmas celebrations – De Minaur on the practice court and Tomljanovic on an aeroplane as she returned to Australia – was therefore an easy sacrifice for the team-focused pair.

“Maybe Santa will give us some great results in the United Cup. That’s all we care about,” De Minaur quipped.

The passion for the popular Australians – who will be joined in Sydney by Nick Kyrgios, Jason Kubler, John Peers, Maddison Inglis and Sam Stosur – is helped by the stellar example set by their Australian captains.

Adding to the unique nature of the season-opening event, it’s a role that will be shared for Australia by Stosur and Lleyton Hewitt.

De Minaur and Tomljanvoic noted that the pair bring contrasting styles to their leadership roles.

“Sam is like a really wise sister. I remember when I first came on tour she was so nice to me and I was so intimidated by her and nervous around her and she ended up being the nicest person ever,” Tomljanovic noted of Stosur.

“And just to have her, for my Fed Cup (now Billie Jean King Cup) debut, she was there and gave me a pep talk even though I did not do well (on the)first day.

“She’s been really a great role model and to have her on the bench and part of the team it’s going to be amazing.”

De Minaur has thrived under Hewitt’s mentorship as Davis Cup captain, the younger Australian now holding an 11-5 win-loss record since debuting as a teenager four years ago.

“Lleyton’s going to bring a lot of fire. We’re going to very fired up – whether it’s on the bench or on the side of the court, so I think we’ll get a healthy balance,” the 23-year-old commented.

“It seems like Sam is calm and collected, more reserved, very wise. And then we’ve got Lleyton, who’s fiery, in-your-face and passionate.”

Further inspiration comes from the memorable performances that each Australian has amassed at their home stadium.

The Sydney-born De Minaur claimed his breakthrough first ATP title at the Sydney International in 2019 and has since won the two Davis Cup matches he contested at Ken Rosewall Arena.

“It’s great to be back here in Sydney. Obviously I grew up here,” he said. “It’s a great time, a great place to be and (I’m) very excited to be here with Team Australia.”

Tomljanovic, who is currently ranked a career-high No.33, has similarly fond memories of her home court.

“It doesn’t get much better than this,” she said. “Sydney has been good to me over the years and last year I actually enjoyed so much playing on centre court, so I’m very excited to kick off the first week of 2023 with the team here.”

Team Australia faces Great Britain on Thursday 29 and Friday 30 December, as well as Spain and the Czech Republic in the days ahead.

> BUY NOW: Get your tickets to cheer on the Aussies at the United Cup