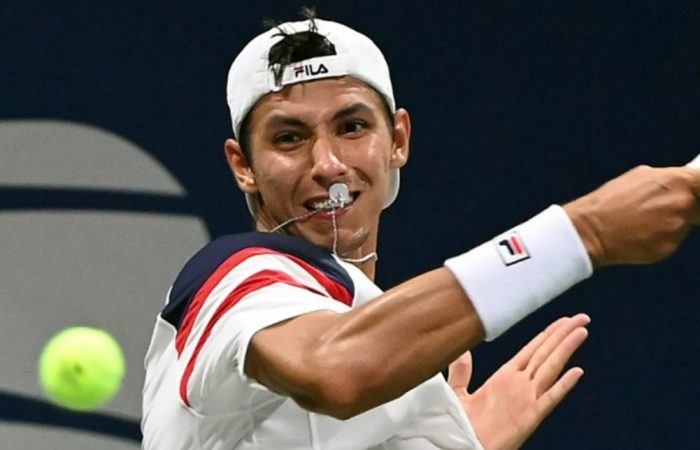 Played at an ATP Challenger tournament in Canberra, then world No.89 Schwartzman dismissed the unranked wildcard in straight sets.

Their second career meeting comes on a much larger stage, facing off in the second round at this year’s US Open.

Popyrin, who at 196 centimetres now towers above the 170-centimetre Argentine, is ranked No.84 and looking to advance to the US Open third round for the third time in his young career.

The 30-year-old Schwartzman, a two-time US Open quarterfinalist, is currently ranked No.16 and aiming to progress to the third round at Flushing Meadows for the fifth time in six years.

Their rematch looms as a must-see encounter on an exciting day four schedule, which features 13 Australian players competing across singles and doubles events.

James Duckworth (AUS) v [20] Dan Evans (GBR)
Men’s singles, second round, Court 12, first match (from 1am AEST)
World No.83 Duckworth is through to the US Open second round for the first time in six years and has matched his career-best result at the tournament. The 30-year-old is now hoping to score his first top-50 win at a Grand Slam when he faces 32-year-old Brit and world No.23 Evans. “It’ll be a tough battle,” Duckworth said. “(I’m) looking forward to the challenge. Evo’s a great player, he’s been really consistent the last three or four years.”
Head-to-head record: Evans leads 1-0
Last meeting: Evans won 6-2 6-2 (Stockton, October 2018)

Jason Kubler (AUS) v [22] Frances Tiafoe (USA)
Men’s singles, second round, Grandstand, fourth match
The in-form Kubler, who has won 30 of his past 38 matches, has equalled his career-best US Open result and is now hoping to reach the third round for the first time. Standing in the world No.109’s way is a big-hitting American. At world No.26, Tiafoe is the highest-ranked contender remaining for the host nation. The 29-year-old Kubler is targeting a fifth career win against a top 40-ranked opponent and his third in an outstanding season.
Head-to-head record: First career meeting

Matt Ebden (AUS)/Max Purcell (AUS) v [14] Santiago Gonzalez (MEX)/Andres Molteni (ARG)
Men’s doubles, first round, Court 9, first match (from 1am AEST)
Reigning Wimbledon champions, world No.34 Ebden and world No.37 Purcell, teamed up for the first time at last year’s US Open and advanced to the quarterfinals. They’ve been handed a tough draw in their return, pitted against the No.14 seeds. Gonzalez is a 39-year-old Mexican ranked No.24 and Molteni is a 34-year-old from Argentina ranked No.39.

[12] Storm Sanders (AUS)/Caroline Dolehide (USA) v Lucia Bronzetti (ITA)/Camila Osorio (COL)
Women’s doubles, first round, Court 15, second match
After making the US Open quarterfinals last year, world No.21 Sanders and world No.35 Dolehide return looking to better that effort. The No.12 seeds, who have advanced to three major quarterfinals as a team, face Bronzetti, a 23-year-old Italian, and Osorio, a 20-year-old Colombian, in the opening round. This is 28-year-old Sanders’ third US Open campaign.

Daria Saville (AUS)/Leylah Fernandez (CAN) v [2] Coco Gauff (USA)/Jessica Pegula (USA)
Women’s doubles, first round, Grandstand, third match
Saville is teaming with US Open 2021 singles finalist Fernandez, a 19-year-old Canadian with a doubles ranking of No.52. The first-time pairing face world No.1 Gauff and world No.6 Pegula, the second seeds and Roland Garros 2022 runners-up. This is 28-year-old Saville’s fifth appearance in a US Open doubles draw – and first since 2018.

Gabriela Dabrowski (CAN)/Max Purcell (AUS) v [6] Yang Zhaoxuan (CHN)/Rohan Bopanna (IND)
Mixed doubles, first round, Court 4, fifth match
Purcell advanced to the US Open mixed doubles semifinals last year – and the world No.37 is eyeing an even deeper run alongside world No.8 Dabrowski in 2022. However, the first-time pairing face a tough first-round assignment. They have been pitted against the sixth seeds, world No.14 Yang and world No.19 Bopanna.

[4] Storm Sanders (AUS)/John Peers (AUS) v [WC] Catherine Harrison (USA)/Robert Galloway (USA)
Mixed doubles, first round, Court 14, fifth match
Aussie duo Sanders and Peers are teaming up for the first time. This is world No.21 Sanders’ second career appearance in a US Open mixed doubles draw, while experienced world No.10 Peers is making his seventh. The 34-year-old Peers has reached the mixed doubles quarterfinals or better at all three previous Grand Slam tournaments this season.