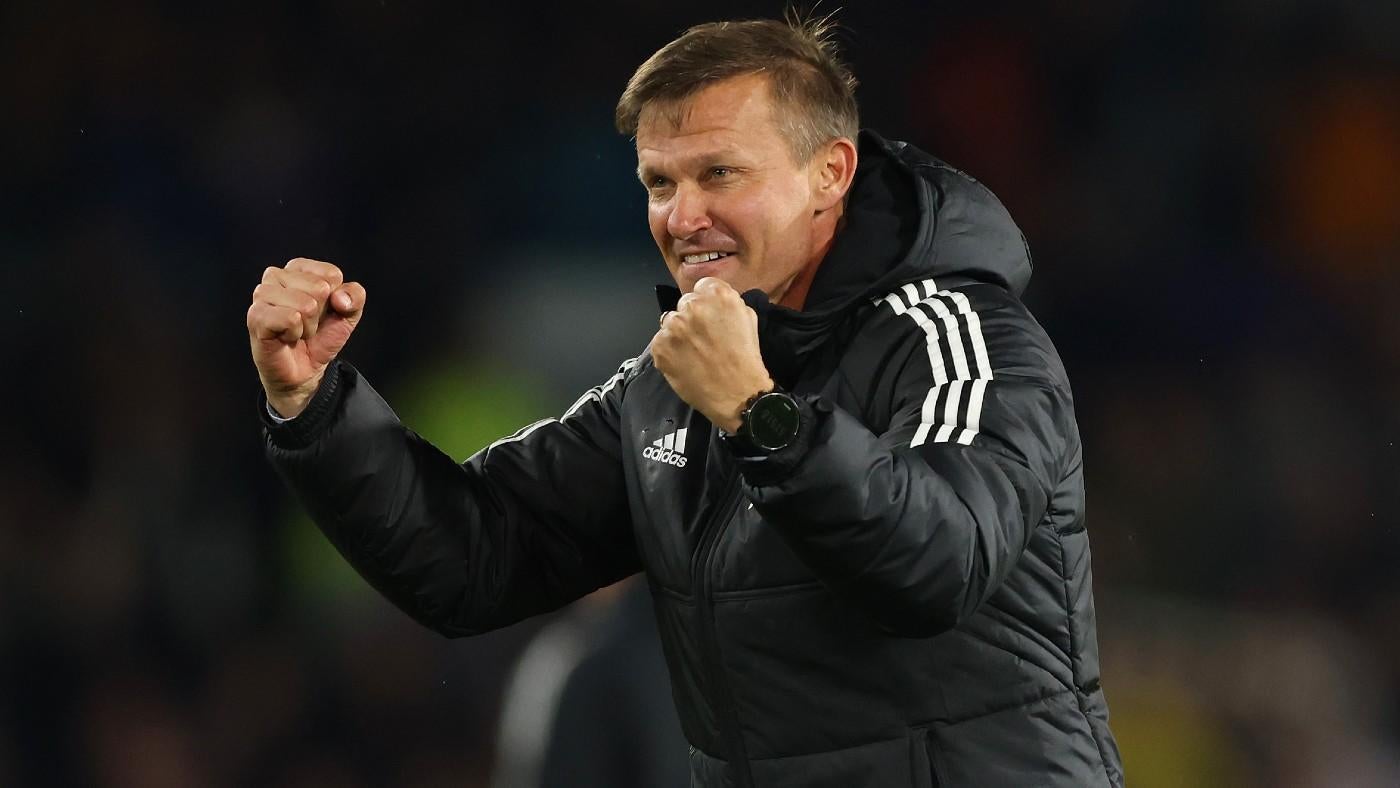 After missing the 2018 World Cup, making it to the round of 16 in 2022 was a landmark moment for the United States despite things ending in less than stellar fashion in a 3-1 loss to the Netherlands. It was a growth experience for the team but with Gregg Berhalter’s contract being up this December, it’s fair to ask if he should return as coach of the national team for the 2026 World Cup cycle as the host nation.

There are reasons to keep Berhalter in charge as he has exceeded high U.S. expectations by winning the Gold Cup, Nations League, and making it to the last 16 of the World Cup — something that shouldn’t be taken for granted after missing out on the World Cup in 2018, but it’s fair to question if he could’ve done more with the talent at his disposal. Most decisions, like leaving Zack Steffen out of the squad to make Matt Turner the number one keeper and making Tim Ream and Josh Sargent starters were vindicated by their performances.

But others, like his substitute patterns, leaving Jordan Pefok out of the squad when he would’ve been useful against the Netherlands, and the ambiguity around Gio Reyna’s playing time are all reasons to explore a possible fresh lens on the team. Reyna’s situation in particular is a weird one as Berhalter reported that Reyna aggravated a hamstring injury ahead of the Wales match before only playing nine minutes against England. Reyna said that he was healthy and available for Wales although he did acknowledge the injury as well. Reyna did play the second half against the Netherlands but he played part of it as a false nine before Haji Wright came in allowing Reyna to move to the wing and influence the game — again showing Berhalter’s odd substitute patterns.

Margins are fine at a World Cup and Berhalter’s every decision was put under the microscope but he also passed expectations by making it out of the group stage. So while it’s fine for sporting director Earnie Stewart and U.S. Soccer to look elsewhere, a lot of care needs to be put into who is hired because Berhalter has raised the bar for this team by setting a new standard. Just being competitive in Concacaf isn’t okay anymore as the team has surpassed Mexico and now look to fend off Canada. It’s time to dominate the region.

“In the next couple of weeks, I’ll sit down and clear my head and think about what’s next,” Berhalter said when asked about his future.

According to ESPN, Berhalter will be set for contract talks with the U.S. Soccer Federation but he is also interested in exploring European club options which could be a win-win for both U.S. Soccer and Berhalter. A second World Cup cycle can end in stagnation but Berhalter has also earned the ability to leave the job on his own terms due to resetting the trajectory of the team.

With the USMNT hoping to return to the Copa America in 2024 for the first time since 2016, it will be a good chance for whoever the coach is to test themselves against top Conmebol opposition. In the 2016 edition, the USMNT finished fourth, knocking off Ecuador in the quarter-finals before losing to Argentina and Colombia. Without needing to qualify for the World Cup in 2026 since they are hosting, this is the kind of competition that they’ll need to face ahead of 2026. Getting friendlies against European nations is tough due to Nations League commitments, but if the Americas band together, there is certainly room for growth all around.

If Berhalter won’t be taking charge of these matches, let’s take a look at some possible candidates:

Currently coaching El Salvador after rising through coaching their youth ranks, Perez has played a large role in increasing the team’s talent level due to the recruitment of dual nationals. With so much talent in Concacaf that is eligible for more than one nation, the recruiting arms race is an important one. He has had a flexible style with the team and was also able to lead the team to a draw against the United States in Nations League play.

A former U.S. international and U.S. youth coach, it feels like Perez would need to at least to win the Gold Cup with El Salvador before stepping up into a job of this stature. Moving into a front office or youth role with the United States would be more likely right now but with his Concacaf connections, he can’t be ruled out.

Turning the Union into a force within MLS, Curtin’s name has been rising through the coaching ranks year after year. Helping develop Brenden Aaronson and Mark McKenzie as well as many other players coming through the youth ranks, Curtin will have a familiarity with much of the squad by 2026. Tactically flexible, Curtin’s style of pressing and runs off the ball can suit a smooth transition from Berhalter to a new style without needing a complete overhaul.

Players will also run through a wall for Curtin as he’s an excellent motivator and is good at connecting with his team. Nitpicking his game, he has similar struggles to Berhalter with predictable substitutions that at times come too late in matches to make a difference but with the talent that has been at his disposal, it hasn’t stopped Curtin from winning the Supporters’ Shield or making it to the MLS Cup Final.

Marsch is a tough one. Like Curtin, he’s someone who is probably able to have a smooth transition due to his familiarity, but he likely wouldn’t be available unless he’s fired from Leeds United. With the team only two points above the relegation zone in the Premier League, that is possible but Marsch has struggled to improve the team’s defense which has been a USMNT strength under Berhalter. It’s not to say that Marsch can’t organize the defense as he’s done that in Major League Soccer with the New York Red Bulls but the team would possibly be trading issues with Marsch. Scoring and substitutions would be better but Marsch’s system is also prone to individual mistakes allowing easy goals while Berhalter’s more conservative approach protects the team.

If he’s available and the team wants to make a change, Marsch should be considered the front-runner, but things may not be as smooth as expected.

After crashing out of the group stage with Belgium, Martinez is now available and will attract interest from different clubs. On one hand, he has led Belgium to a third-place finish at the World Cup, but on the other, he underachieved with a roster that is talented. Martinez is a good example of why a second World Cup cycle doesn’t work for most coaches but he was too loyal to aging Belgian stars while paying the price.

Having already wasted one golden generation, it’s tough to back Martinez managing the United States with key players entering their prime. Add in that a foreign coach has never won the World Cup and the intricacies of understanding Concacaf, then it all lines up to avoid, avoid, avoid.

Becoming the first coach to lead an MLS team to win Conacaf is quite an achievement for Schmetzer. Doing so while also managing injuries and changing your formation constantly ascends Schmetzer to legendary status. While he’ll lead Seattle to play in the Club World Cup in 2023, after that, what more does Schmetzer have to accomplish in MLS? He has won MLS Cup twice along with Concacaf Champions League so technically he can go after an Open Cup title but there isn’t much more for him to do in Seattle. With general manager Garth Lagerwey now in Atlanta as president and CEO, if there’s a time for a reset out west, it’s now.

The United States don’t really need a coach until 2024 if they play in Copa America, which aligns with when Schmetzer would be available. A statically astute manager, if I had to make one call for replacing Berhalter, it would be a call to Schmetzer.

If the United States wants to go the flashy route for filling a vacancy, Tite of Brazil, former Germany coach Joachim Low, and France manager Didier Deschamps could all be available after this World Cup. Despite this not being a job that would normally interest managers of their stature, the growth of the USMNT along with the draw of Copa America and managing a World Cup on American soil could be just enough to bring them in if they’re not snapped up by club teams before getting the call.