As International Day of the Girl is celebrated, rising junior Wambui Taylor is drawing inspiration from powerful role models – and showing inspirational qualities of her own. 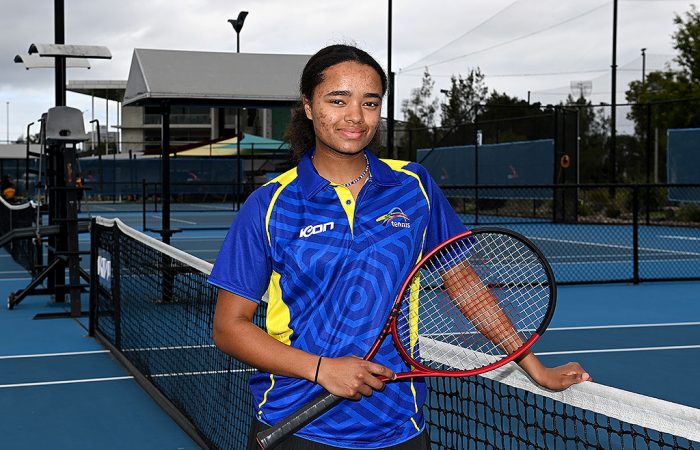 When Wambui Taylor is asked to name who has been most influential in her tennis development, the Canberra teenager doesn’t hesitate to name a close and enduring role model.

“My mum has been there from day one,” said Wambui, who took up the game at age eight after an earlier interest in horse-riding. “A lot of the opportunities that I’ve been able to experience have been as a result of my mum supporting me from day one in my journey.”

That journey so far for Wambui includes representing the ACT in national team events, as well as competing in a range of ITF tournaments throughout Australia. Earlier this year, the 16-year-old was named the ACT’s Female Junior Athlete of the Year.

Wambui acknowledges the support of her long-time coach, Reza Tompsett, in achieving those impressive milestones. “He really goes above and beyond … he’s put so many hours into building me as a tennis player,” she explained.

Further positivity is drawn from the teenager’s favourite professional player. “Rafael Nadal has definitely been my biggest inspiration in tennis – just because of the way he carries himself on and off the court,” Wambui related.

“I feel like he gives back to the sport so much. His attitude on the court, his never-say-die spirit, his discipline, his fight for every single point. I think that’s really admirable and I like to bring that to my own game – not only his athleticism, but also his attitude.”

Meanwhile, the recently-turned 16-year-old is showcasing many role model qualities of her own.

While she juggles her Year 10 studies with hours-long daily practice and fitness sessions (typically one in the morning and another in the afternoon), the Canberra Grammar student also finds time to support younger athletes.

As a participant in Tennis NSW’s Future Leaders program, Wambui is completing a project in which she is creating a tournament for younger students at the school.

“I do love giving back to the sport, because I feel like if it wasn’t for the people that I met through it, and the people that supported me, I wouldn’t be where I am,” she said.

It’s a positive outlook that the teenager also applies to another extra-curricular project of part-time coaching. Wambui notes that while she helps develop younger players, she is also absorbing important lessons of her own.

“It’s an interesting way to learn because players look at the sport differently when they’re younger,” she said. “I just find it interesting to see their perspective and also to look at tennis from a different view.”

As she builds on a naturally aggressive game style, Wambui is also applying some important mental skills to her overall tennis development. Some of the most satisfying experiences in the sport, she explained, evolved from some hard-gained lessons early in her career.

“My proudest moment would have to be, I think it would have been in 2016 or 2017 when I tried out for the Bruce Cup team and I didn’t make the team,” she recalled.

“Obviously I was quite disappointed. I wasn’t playing very well and I wasn’t as good as I wanted to be at the time but then the next year I came down and I did the try-outs again and I made the team quite convincingly. I think I played No.2 on the team.

“I think the disappointment from playing poorly and then to do well in the next round – it was just a really good feeling to see my hard work paying off.”

Wambui, who has since represented the ACT in both the Bruce and Pizzey Cup interstate school competitions, believes other young women can learn from her experience of hard work paying off in the longer term.

“This is what my coach tells me every time – that losing is not a failure, it’s only a failure if you quit,” she said. “And I love just looking back on that experience and saying ‘yeah, that’s really, really true.’”

It’s a perspective that also resonates when Wambui reflects on International Day of the Girl, which is celebrated in 2022 with a theme of “time is now”.

“It’s meaningful to capitalise on this moment now but also recognise the women before us who have given us opportunities,” she reasoned.

“(It’s about) being able to take ourselves further with what’s provided to us.”

And while Wambui is reluctant to agree she’s a role model to other young women, she can quickly name the qualities that set an inspirational example.

“I do try to carry myself as someone who respects the sport and myself and others within it,” she said.

“And then also just having the discipline to complete the small things and being supportive of others. I think having the passion is important to me and being able to show others that I do care about the sport.

“If that leads them to see me as a role model, then I’d be completely honoured but I find it important to carry myself in that way, because that’s how my mum brought me up.”