Australian Heath Davidson is one of five Australians scheduled to compete on day 12 at Wimbledon 2022. 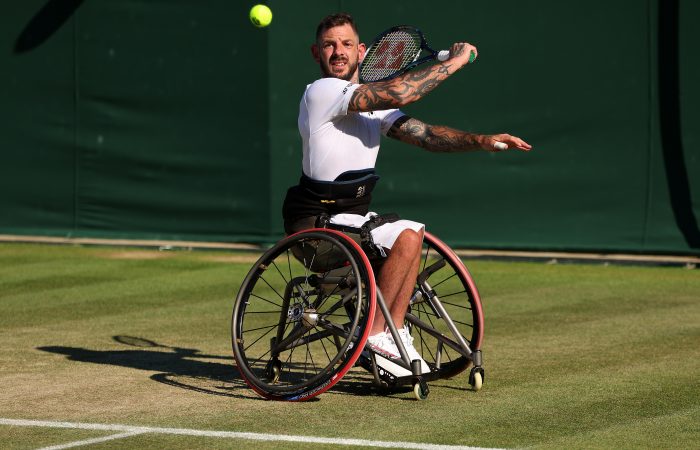 Today is gentlemen’s singles semifinals day at Wimbledon, but Australia’s Nick Kyrgios does not need to worry about taking to the court.

World No.40 Kyrgios has received a walkover from two-time Wimbledon champion Rafael Nadal in their scheduled semifinal showdown, propelling him into his first Grand Slam singles final.

It means the Aussie spotlight will be on Heath Davidson, who is competing in the quad wheelchair doubles semifinals alongside Brazilian Ymanitu Silva. They face the world’s top team, Dutch pair Sam Schroder and Niels Vink.

Davidson is one of five Australians scheduled to compete on day 12 at the All England Club.

Play begins from 8pm AEST and is broadcast live in Australia on the Nine Network and Stan Sport.

Casey Dellacqua (AUS)/Alicia Molik (AUS) v Flavia Pennetta (ITA)/Francesca Schiavone (ITA)
Ladies’ invitational doubles, Court 12, first match (from 8pm AEST)
Dellacqua, who achieved a career-high doubles ranking of No.3, and Molik, a former top-10 player in both singles and doubles, are two of Australia’s most successful female players in recent decades. The Aussies are looking for their first win in their final round-robin match.

Giselle Isabella Guillen (AUS) v Marianne Angel (MEX)
Girls’ 14 and under singles, Court 7, second match
Guillen, a 14-year-old from New South Wales, is Australia’s representative in the first 14 and under girls’ singles competition at Wimbledon. She has scored one win from two matches so far and faces Mexico’s Angel in her final round-robin match.

[6] Jake Dembo (AUS) v Pedro Dietrich (BRA)
Boys’ 14 and under singles, Court 5, second match
Dembo is representing Australia in the inaugural 14 and under boys’ singles competition at Wimbledon. The 14-year-old from Perth describes the opportunity to compete at the All England Club as “a dream come true”.

[6] Jake Dembo (AUS) v Malek Alqurneh (JOR)
Boys’ 14 and under singles, Court 6, fifth match
After losing his first round-robin match yesterday, Dembo is looking to score his first wins today. He is scheduled to play two matches, as the round-robin competition draws to a close.