This week, ATPTour.com begins its annual season-in-review series, looking back at 2022’s best matches, biggest upsets, most dramatic comebacks and more. In this installment, we look back at the best upsets at the Grand Slams, featuring Americans Brandon Holt, Maxime Cressy and Sebastian Korda.

5) Australian Open, R1, Korda d. Norrie 6-3, 6-0, 6-4
More than the result itself, this upset makes the cut for the domination with which Sebastian Korda scored his first Aussie Open win. Playing in his first match of the 2022 season, the American cruised to victory behind immediate breaks in all three sets, dismissing the 12th seed in one hour, 42 minutes.

A positive COVID-19 test forced Korda to withdraw from the Adelaide International I event in the first week of the season, and he made his way to Melbourne only after seven days of hotel isolation. But he quickly made up for lost time by improving to 2-0 in his ATP Head2Head against Cameron Norrie.

Norrie finished the 2021 season in great form, winning the Indian Wells title in October before making his Nitto ATP Finals debut as an alternate. While he would go on to break into the Top 10 of the Pepperstone ATP Rankings and reach the Wimbledon semi-finals in 2022, he did not bring his best tennis to Melbourne — and Korda was in no mood to let him hang around and find it.

Korda celebrated his statement victory in style with a scissor kick, in honour of his coach and father, 1998 Australian Open champion Petr Korda.

“I am just super happy with the way I came out. I stuck with my tactics. They worked really well and [I am] really comfortable on these courts,” the rising star said post-match. “I think even in the tight situations I still stayed with it. I kept being aggressive, using my powerful strokes on these fast courts.”

Then 21, Korda backed up that result with a fifth-set tie-break win against Corentin Moutet before falling to Pablo Carreno Busta in four sets. 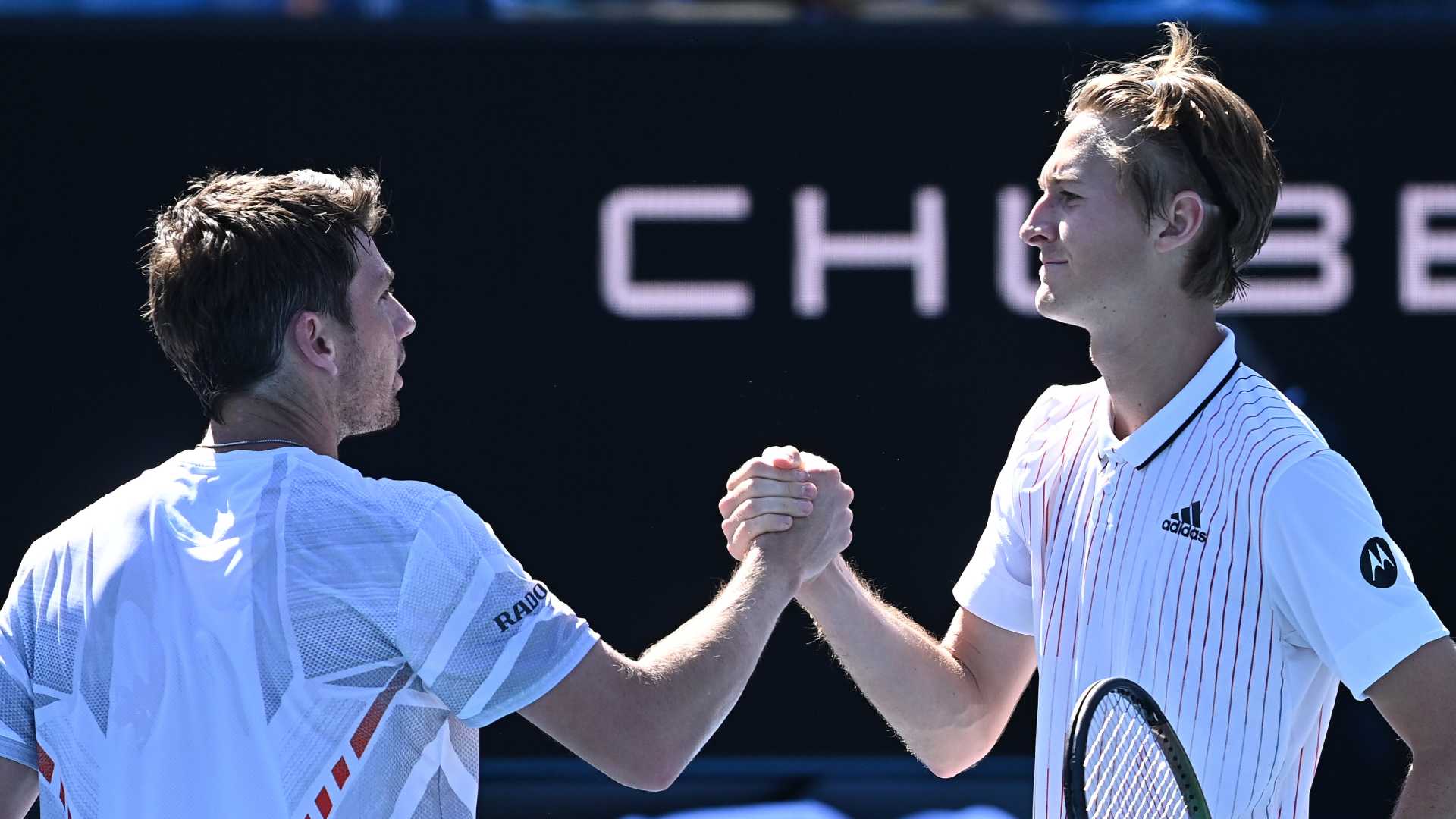 4) Wimbledon, R1, Cressy d. Auger-Aliassime 6-7(5), 6-4, 7-6(9), 7-6(5)
Beginning the year outside the Top 100 in the Pepperstone ATP Rankings, Maxime Cressy made waves early in the season in Australia. The Paris-born American reached the Melbourne Summer Set final as a qualifier and later reached the Australian Open fourth round, where he took a set off eventual finalist Daniil Medvedev. But Cressy’s serve-and-volley game is best suited for grass courts, and that’s where he scored the biggest win of his career (by ranking) against sixth seed Felix Auger-Aliassime.

While knowledgable fans knew the net-rusher would be a tough out on the London lawns, the fact that the upset came in Cressy’s Wimbledon main-draw debut and earned him his first Top 10 win helped it make our list.

In a flawless serving performance, the 25-year-old stayed true to his attacking credo by charging the net 134 times, winning 71 percent (95/134) of those points. He saved the only break point against him in the match and rose to the occasion in two tie-breaks — executing a stretch volley on match point — to continue his rapid rise.

“It’s very special,” Cressy said after the victory. “Felix was incredibly focussed the whole match. I had to stay focussed until the end. I knew that I would maybe have a few match points and it gets super close. I knew I had to stay in the zone.

After the match, Auger-Aliassime called Cressy “courageous” and a “deserving” winner, and predicted a rise into the Top 20 for the American. One month later, after winning his first ATP Tour title on the grass of Newport, Cressy reached a career-high of World No. 31. 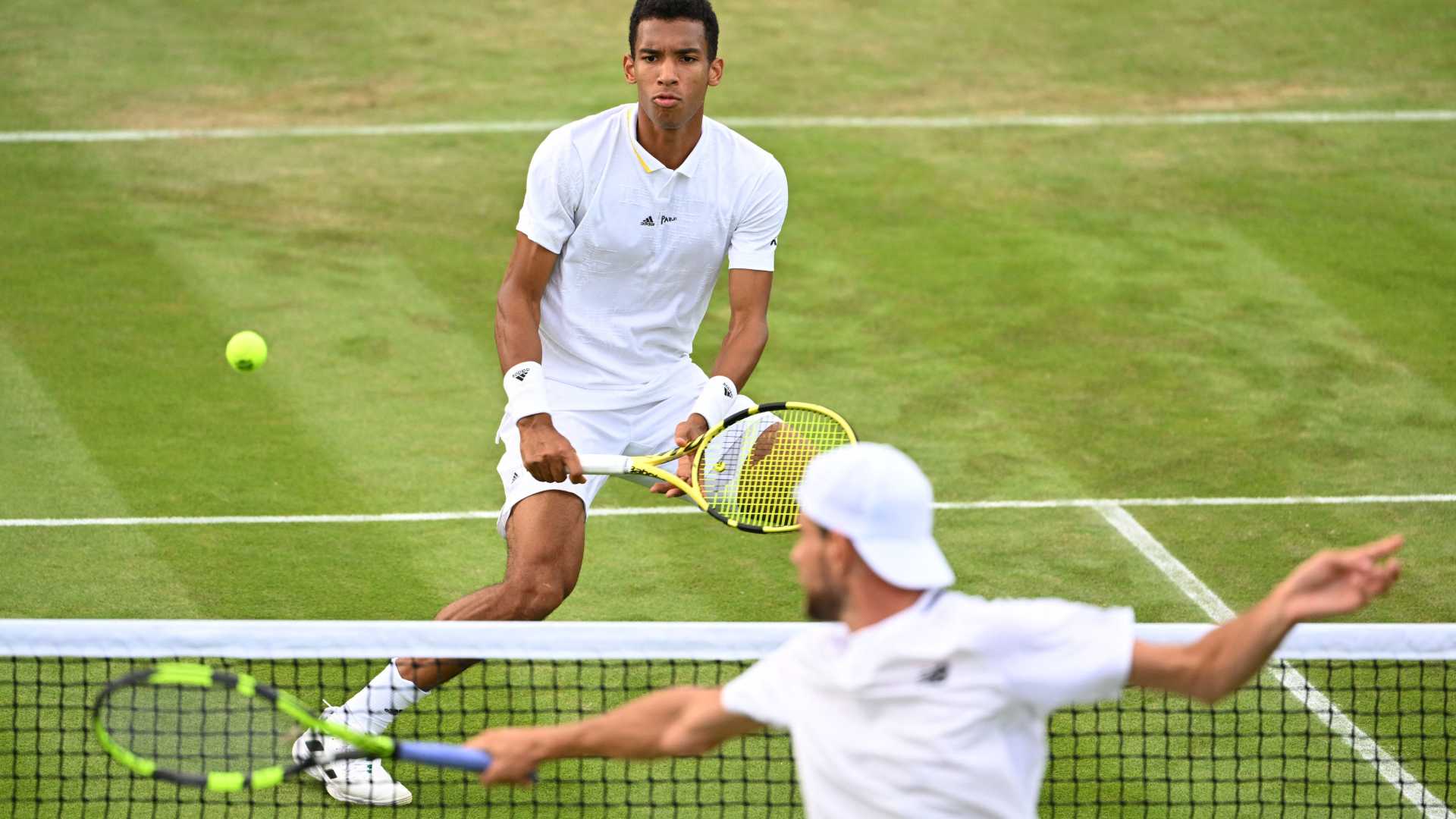 Following a fast start, the 37-year-old Simon faded physically as his Spanish opponent ripped through the fourth set to level and lead 4-2 in the fifth. But with the raucous support of his home fans, the veteran found a second wind and turned the match around, winning its final four games to seal a famous result.

“It was a crazy match, an unexpected win,” Simon said after earning his second tour-level victory of the 2022 season. “It’s the most unexpected win I could have. It was really hard for me to see myself as a winner today when I was just warming up and everything. I knew it would be really hard… When the match starts to turn crazy like this, it means you just have two players on the same level trying to give everything to win. Sometimes you win it and sometimes you lose it.”

After earning his first Roland Garros win since 2019, Simon recorded his 500th career victory with a second-round triumph against Steve Johnson. He bowed out at his home Slam after a defeat to Marin Cilic in the third round and ultimately finished his career back in France at the Rolex Paris Masters in November — but not before a pair of three-set upsets against Andy Murray and Taylor Fritz. 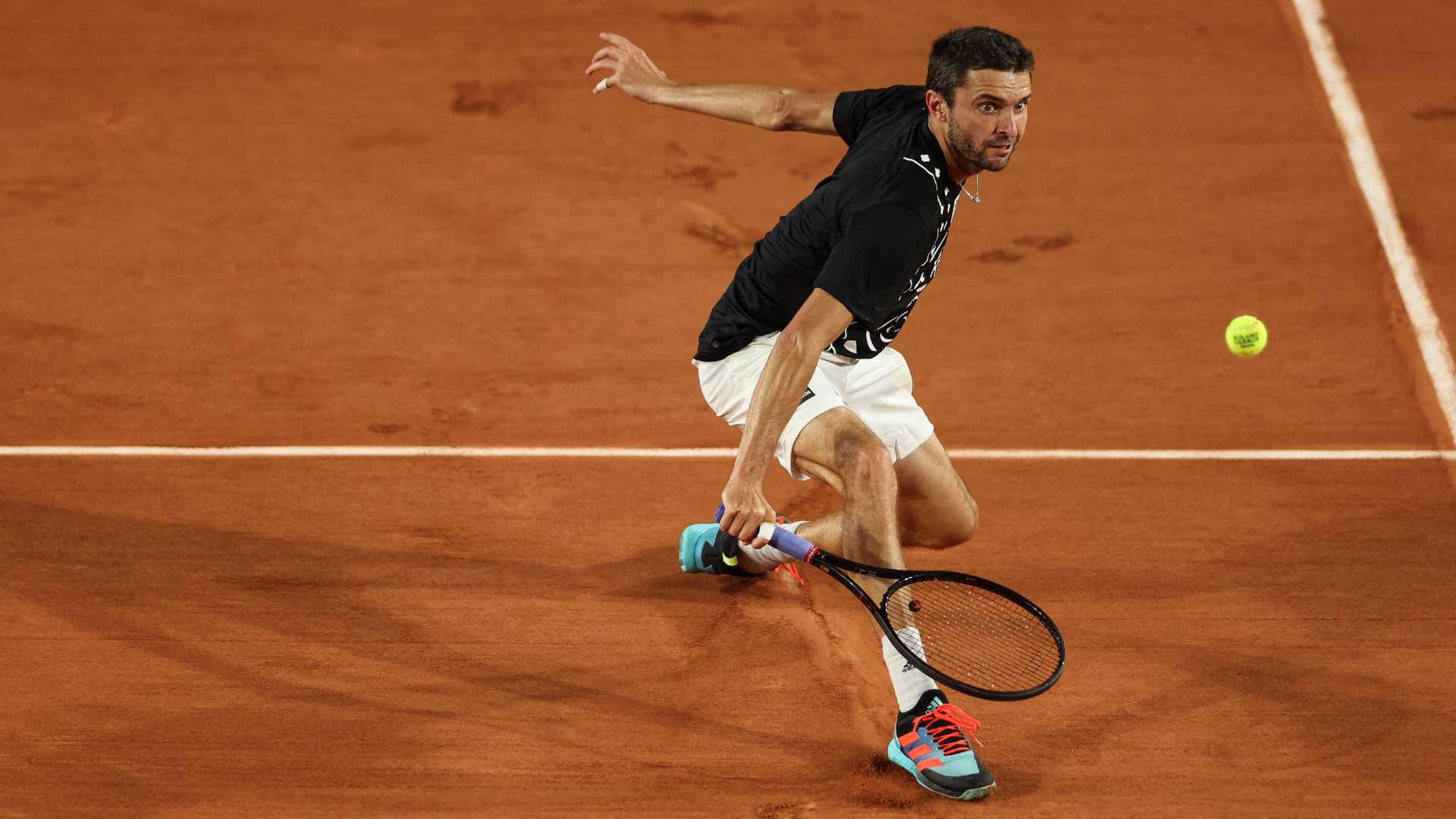 2) US Open, R1, Galan d. Tsitsipas 6-0, 6-1, 3-6, 7-5
The only thing more stunning than this US Open upset was the ease with which qualifier Daniel Elahi Galan raced to a two-set lead against Stefanos Tsitsipas in Louis Armstrong Stadium. With nothing to lose, the fearless Colombian swung for the fences and totally dictated play, not allowing the then-World No. 5 a path into the match in the early stages.

Tsitsipas entered the year’s final Grand Slam with a chance at the No. 1 Pepperstone ATP Ranking, but nearly went two sets without winning a game as Galan led 6-0, 5-0.

It was a scarcely believable start to the 26-year-old Colombian’s US Open main-draw debut, but the finish would prove far more challenging.

The fourth-seeded Greek found his footing to take set three and led by a break in the fourth, but he was soon on the brink as Galan edged back ahead. It took nine match points, as Tsitsipas leaned on his serve to escape time and again, but Galan ultimately completed the job when a forehand error handed him the match-winning break.

By claiming his first Top 20 win in seven tries, the Colombian sent Tsitsipas crashing out of New York in the opening round for the second time in five years. Galan backed up his victory with a five-set triumph against Aussie Jordan Thompson before falling to Alejandro Davidovich Fokina in four sets in the third round. 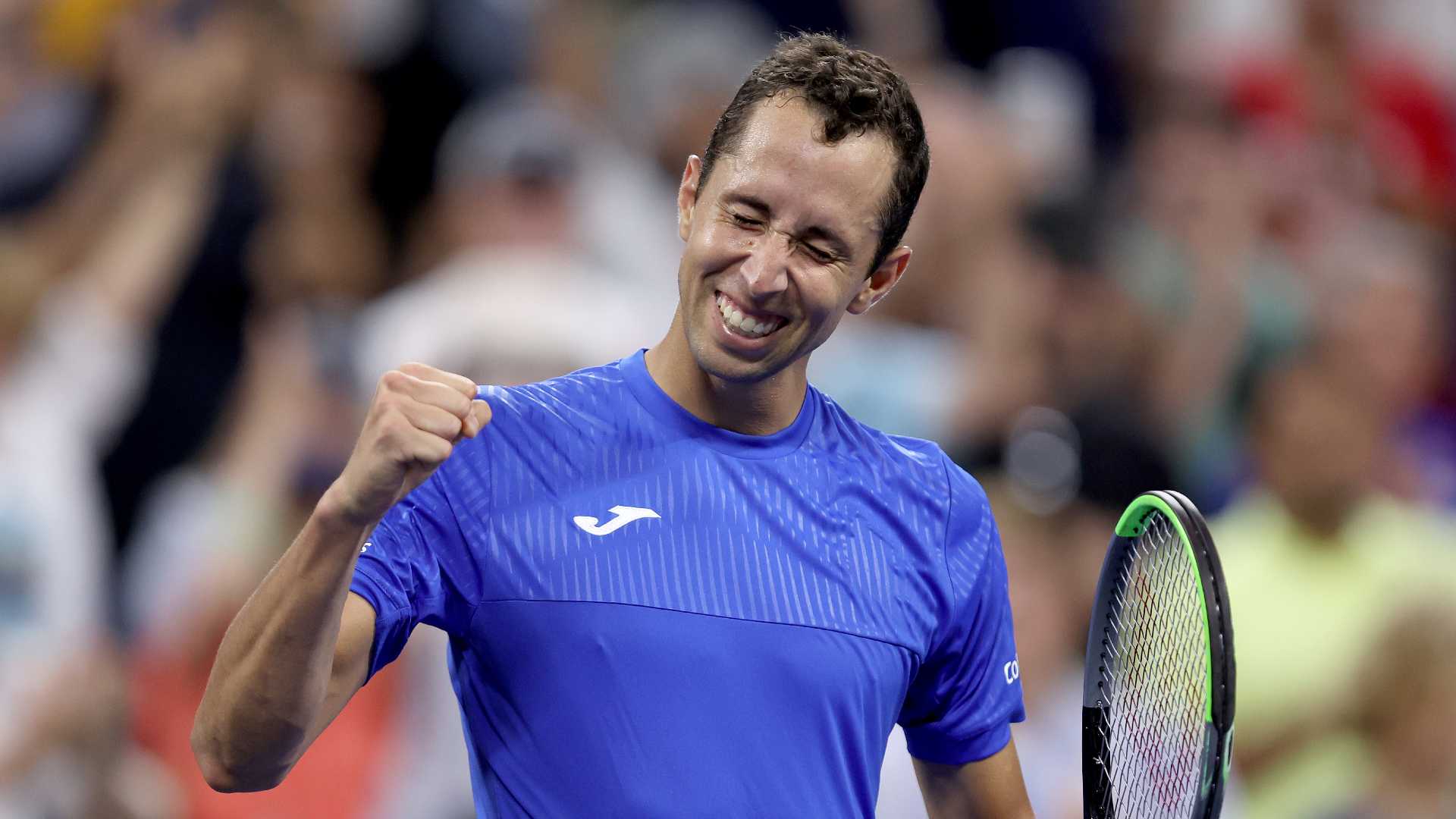 1) US Open, R1, Holt d. Fritz 6-7(3), 7-6(1), 6-3, 6-4
Qualifier Brandon Holt carried on a family tradition of US Open success with a shock victory in a Grand Slam debut for the ages. The son of two-time US Open singles champ Tracy Austin, Holt won his first tour-level match in style by defeating his 10th-seeded countryman Taylor Fritz.

Entering New York at No. 303 in the Pepperstone ATP Rankings, Holt earned all three of his qualifying wins in deciding sets, twice recovering from a set down. He once again had his back to the wall against fellow California native Fritz, dropping the opening set despite roaring to a 5-2 lead.

Holt then saved three set points at 5-6 in set two before running away with the tie-break and racing out to early leads in sets three and four. In each of the last two sets, Fritz cut a two-break deficit to one, but Holt stood tall to serve his way to a landmark victory on home soil.

“I was excited to be playing my first main-draw match,” Holt said after an emotional embrace with his mother, who was courtside in the Grandstand. “I had pretty good momentum from playing three qualies matches in a row. I felt pretty match tough. I had a lot of fun, a lot of friends and family were on the court, in a big stadium. Biggest match I’ve played in so far.”

Adding further significance to the victory was Holt’s injury scare one year earlier. Diagnosed with osteoid osteoma — a condition which caused an extra bone to grow in his hand — Holt underwent surgery in August 2021, keeping him out of action for eight months.

The shock New York result was made all the more stunning by Fritz’s stellar close to the season, which saw him reach the Nitto ATP Finals semis in his tournament debut. For Holt, the victory remains his lone tour-level win.